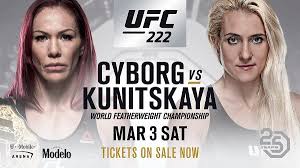 In a card ravaged by key injuries and very low on the radar, with very low expectations, there was a lot to come away with from UFC 222.   $65.95 worth? I won’t go that far but if this is the kind of card that the new UFC ownership is expected to deliver, I can honestly say that I am okay with a few of the things they did right.

I think this card had a good mix of new rising talent and the old guard.  Sugar Seane, Mckenzie Dern, and T City Ortega, all look like a new wave of young talent that look like they can become truly elite contenders.  This is a far cry from the recent ZUFA approach of promoting young talent that might look the part but aren’t exactly elite contenders, i.e. Page, Sage, and Karate Hottie. As for the old guard, it was sobering but good to see the Pyles, Dollaways, and Edgars of the sport get a chance to shine at the same time as the new blood, even if it didn’t exactly turn out well for them.

To see Edgar get finished for the first time in his illustrious career was a shocking reminder of the brutality of this sport and the changing of the guard.  On the flipside, to see a fighter in Andre Arloski reinvent himself at this stage of his career, with a new camp and new approach was also a reminder that it is never over.  To see Dollaway and Lombard end the way it did was also a reminder of this sport that still has a long way to go, as were some of the questionable judging scorecards.

All the action and drama that took place at UFC 222 up to the main bout, put this bout in proper perspective.  Here you had the old in Cyborg vs the new in Kunitskya but what was a complete mismatch.  This bout had the type of appeal and intrigue of an Iron Mike Tyson bout from the eighties, meaning you tune in for the aura in Cyborg and ask yourself how quickly will it be finished?